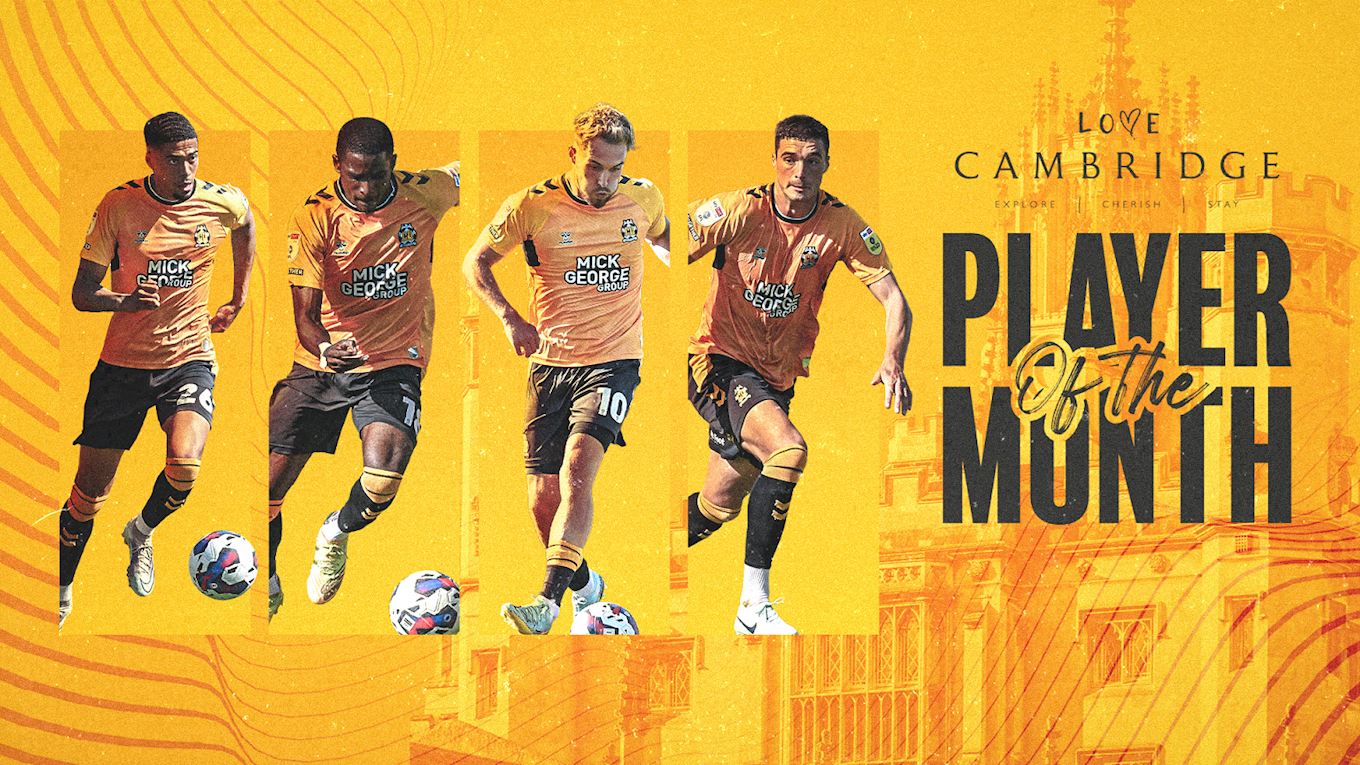 Player of the month

To vote for your Love Cambridge Player of the Month, make sure you follow Cambridge United on Twitter and get your vote in when the poll opens each month. The winning player will be presented with a trophy in an iconic Cambridge location. 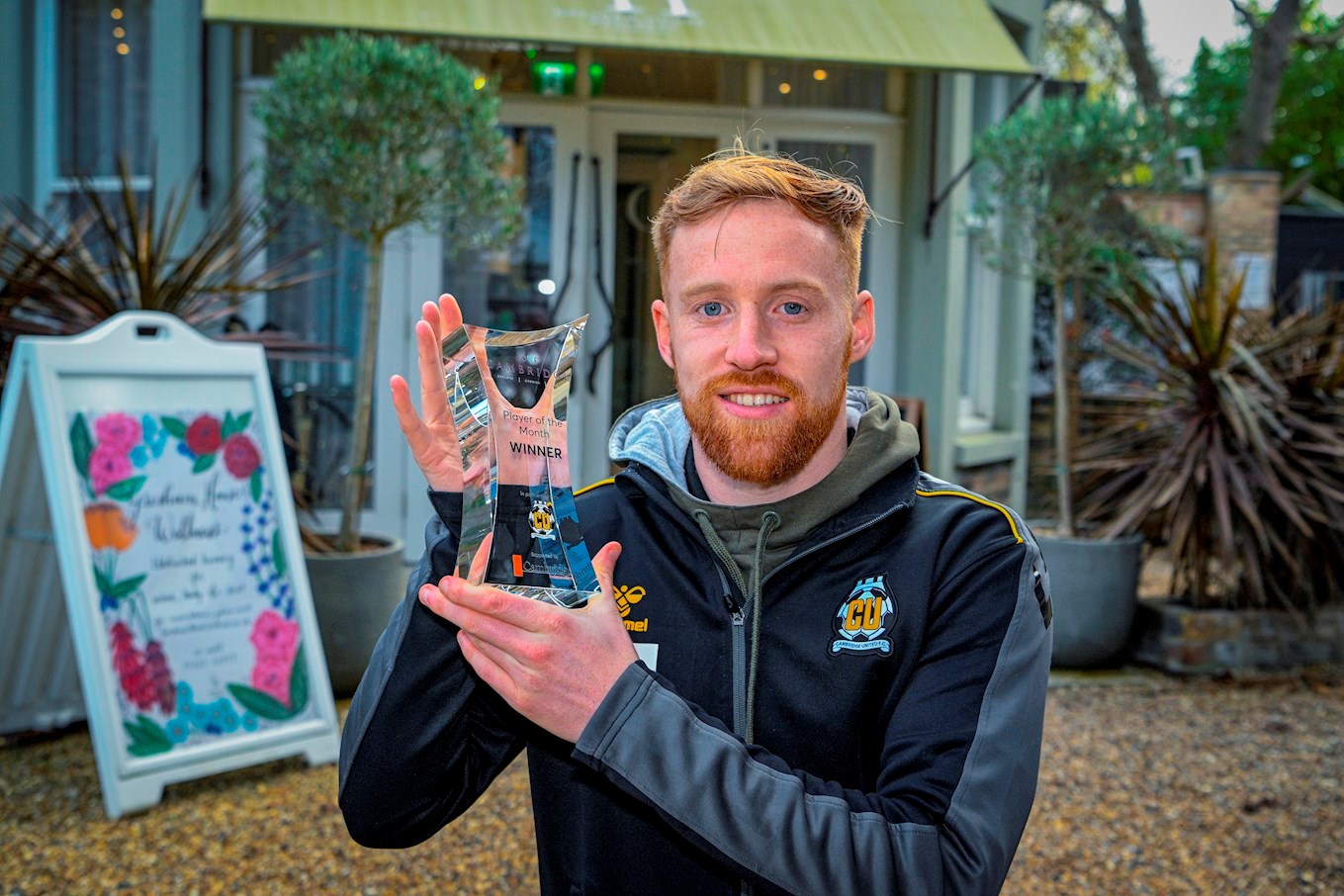 Player of the Month December

James Brophy has been voted the Love Cambridge Player of the Month for December... The 28-year-old wide man received 34% of the public vote following a fine month on the pitch for the U's where he showed his versatility with impressive performances in both attack and defence. Brophy, speaking from Gresham House Wellness at The Gonville said, "I would like to thank everyone who voted for me. It has been a challenging time for us as a group but it's nice to get this recognition for my performances on an individual level." Photographer: Keith Heppell at the Cambridge Independent 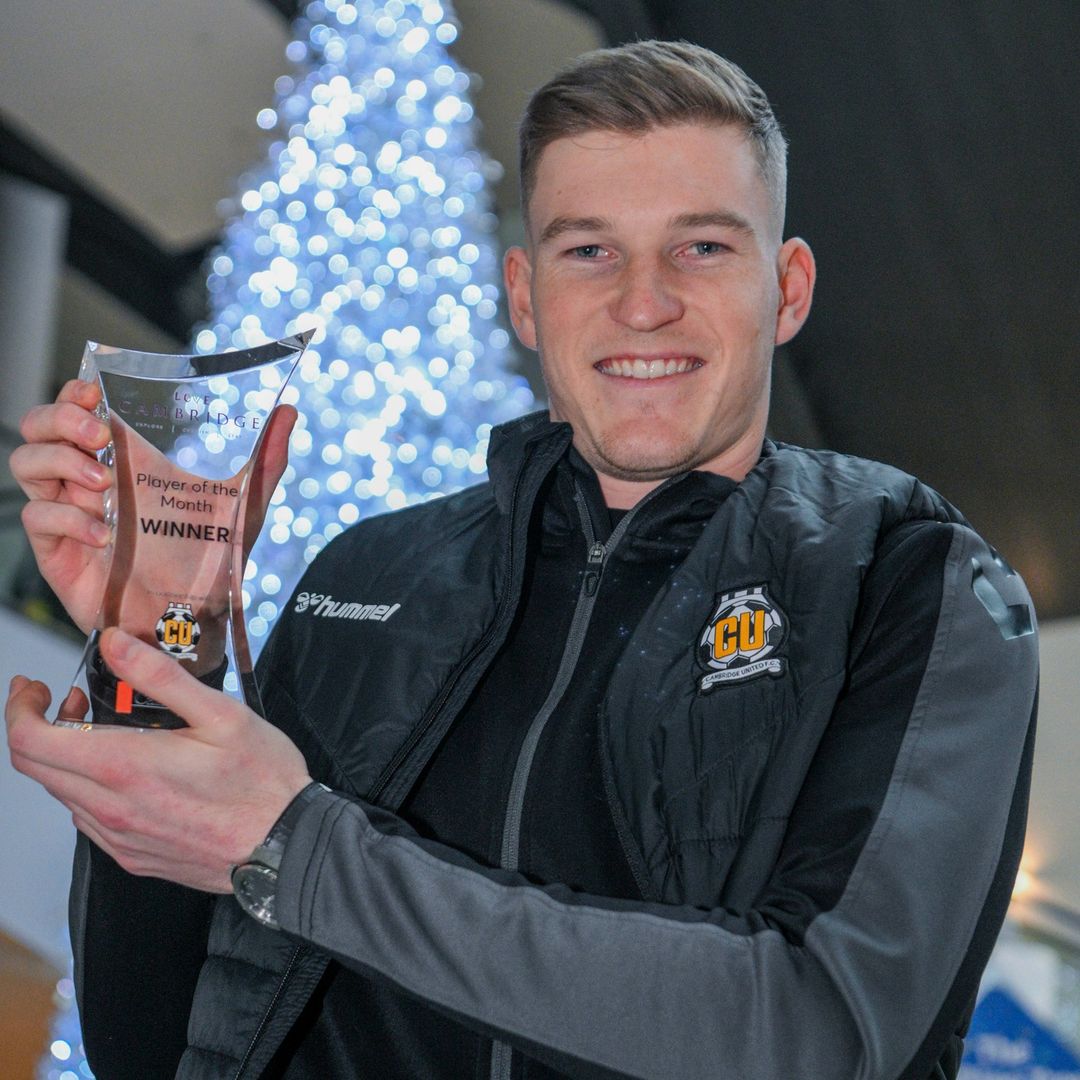 Love Cambridge Player of the Month for November

Despite a difficult month on the pitch for the team, Mannion's performances stood-out as the goalkeeper kept three cleansheets and only conceded three goals across five games. Since Dimitar Mitov's injury in late October, Mannion has stepped in admirably and been a consistent performer between the sticks. Mannion is pictured in front of the gifting tree at The Grafton which is aiming to collect as many gifts as possible to give out to deserving young people in our community this Christmas. Photographer: Keith Heppell at the Cambridge Independent 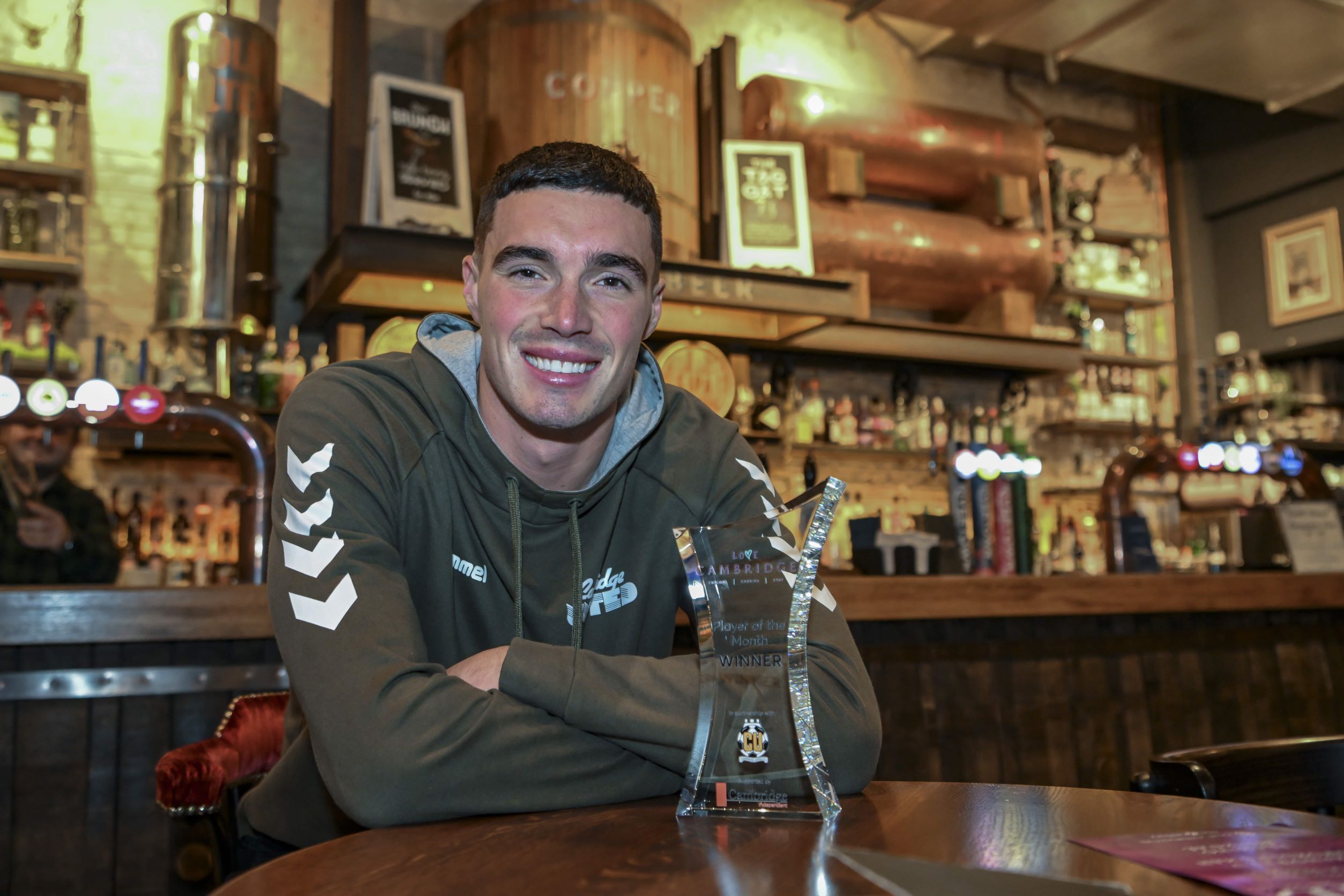 Love Cambridge Player of the Month for October

After being nominated for the third straight month, the U's centre-back has won the award after a commanding set of performances in the heart of the United defence. 2022/23 Season Ticket Holders voted Jones as the winner, after the initial public vote was discounted due to it being compromised via illegitimate means of voting by a group of opposition supporters. Jones, speaking from the Town & Gown Pub & Theatre on Market Passage said, "I'd like to thank all the Cambridge United Season Ticket Holders for voting for me. Although it wasn't our best month on the pitch, we still had a couple of good results and I was pleased to score my first goal in the win over Wycombe." Player of the Month sponsors Love Cambridge is part of Cambridge BID, a collaboration of 1,200 businesses working together to promote and improve the city of Cambridge. Each month's winner will explore the city courtesy of Love Cambridge, by having their photo taken with the award at a famous location. 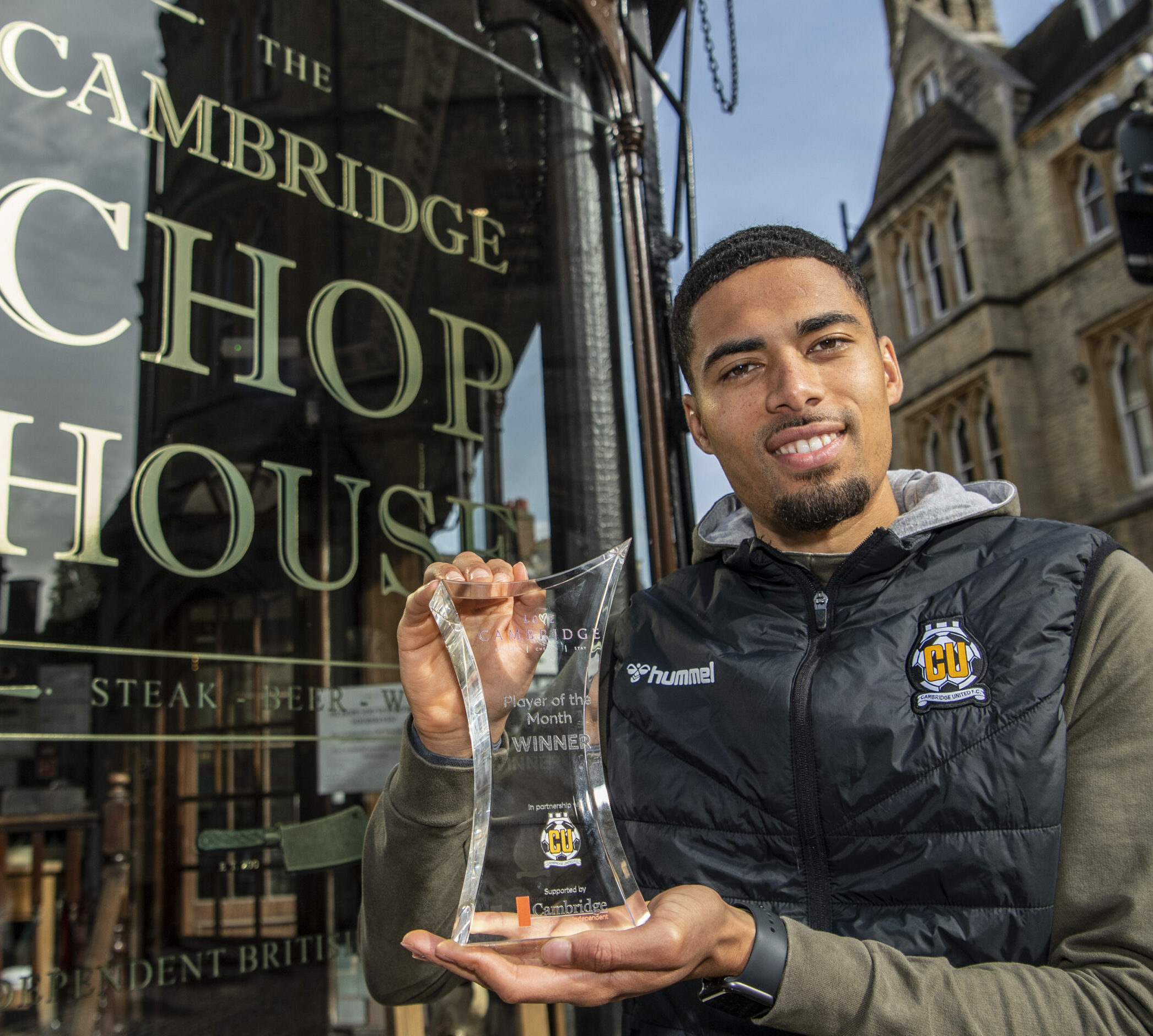 Love Cambridge Player of the Month for September

The 23-year-old received nearly half of the public vote (47%) after an impressive month for the U's. Assists in the wins over Lincoln City and Northampton Town were capped off with the winning goal against Morecambe as the attacker consolidated his all-action performances with meaningful goal contributions. Knibbs, speaking from the Cambridge Chop House on Kings Parade said, "It's an honour to win Player of the Month. I've really enjoyed the start to the season on an individual and team level so it's nice to pick this up and be recognised in that manner." Photographer: Keith Heppell at the Cambridge Independent 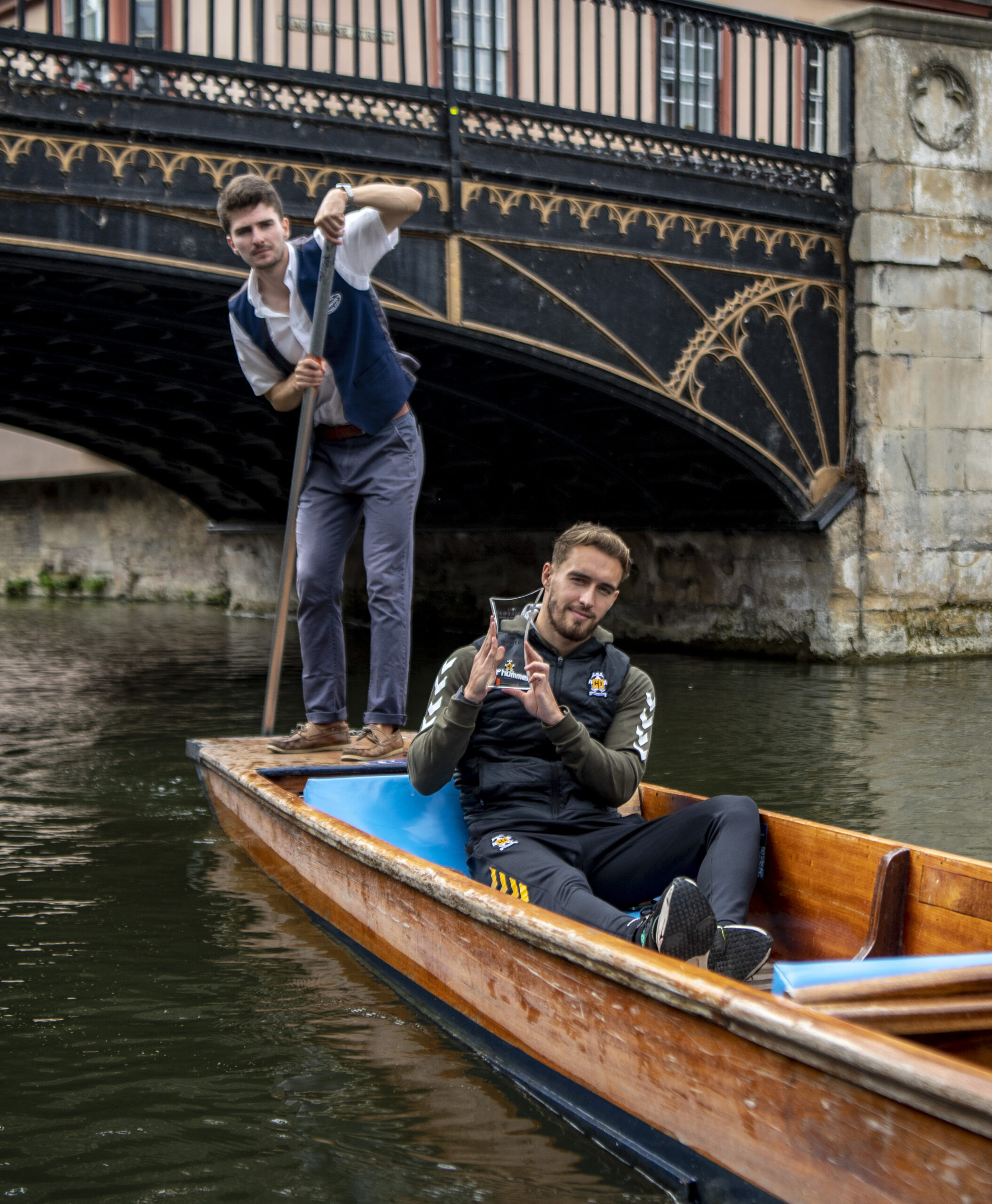 Love Cambridge Player of the Month for August

Sam Smith, the forward received a whopping 65% of the public vote following his four goal haul during the first month of the season, including a superb hat-trick against Burton Albion to help inspire the U's to a dramatic 4-3 win. Smith, pictured at the iconic Scudamore’s Punt Station on Quayside, said it is an honour to be the first recipient of the award. Photographer: Keith Heppell @ Cambridge Independent